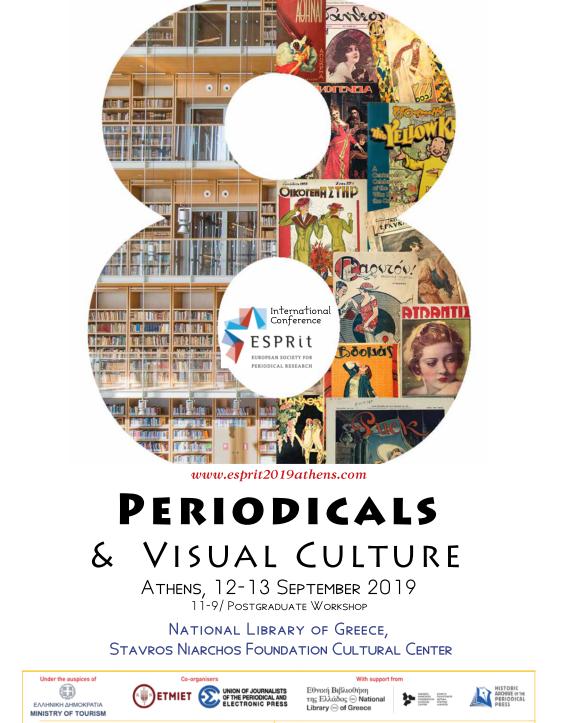 The subject of the 2019 European Society for Periodical Research (ESPRit) Conference is the visual culture of periodical literature, viewed in its broadest sense and in a comparative context. This approach is intended to encompass all visual aspects of periodicals, including typography, covers, format, illustration, fine and avant garde art, cartoons, advertising copy, photojournalism, fashion, portraiture, illustrated travel accounts and ethnographic studies, religious imagery, propaganda and all other dimensions of the visual culture of the printed page. Of particular interest are the development and use of new print technologies for the reproduction of images, the juxtapositions or interactions of imagery and text (at the level of the page or the opening, the issue or the series), the evolution of visual tropes/memes (for example in propaganda and advertising), innovation in design, the emergence of new markets, studies of reader reception of and engagement with visual cultures, the formal (legal) or informal (editorial) regulation of the printed image, and the influence of periodical illustration on art and photography more broadly and on the use of imagery in the daily press in particular.

The conference will draw on and enhance the current Greek Press History Workshop (ETMIET)/ Research Centre for Modern Greece (KENI), Panteion University research project on Greek twentieth-century popular print that seeks to establish the first fully-comprehensive archive of periodicals in Greece, in collaboration with the Journalists’ Union of Periodical and Electronic Press (ESPIT), and the National Library of Greece. Further dimensions that arise from the particular Greek experience, and which invite broader international comparative perspectives, include: (a) the relationships between the uses of imagery in the periodical literature of metropoles and diasporas; and (b) an exploration of the methodologies and the political economies of periodicals research, particularly under the current global circumstances of austerity for the Humanities in general.

Subjects include the following:

•           the presence of periodicals (production, distribution or consumption) in visual culture more broadly

•           Of particular interest are juxtapositions or interactions of imagery and text – either at the level of the page or the opening, the issue or the series.

There will be a day-long postgraduate workshop on periodical studies. The Workshopis for Masters and PhD candidates. Sessions will focus on: (1) the development or application of innovative research methodologies, (2) the benefits of applying digital humanities approaches to periodical and journalism studies, (3) examples of recent research on visual culture in the periodical press, (4) papers that explore the many meanings of ‘the popular’ in relation to the periodical press, and (5) approaches to periodicals and gender.

The closing panel will focus on the current ‘state of the discipline’ of periodical studies in Europe and the United States. The panel will seek to identify the main current research dynamics driving periodical studies in general, and will consider any obstacles to its further development – such as gaps in collections, higher education priorities, and the need to develop new forms of interdisciplinarity – and ways in which they may be addressed.

The Conference theme itself will be illustrated with appropriate exhibitions and pop-up displays, for the wider audience.

The working language of the conference is English and Greek.